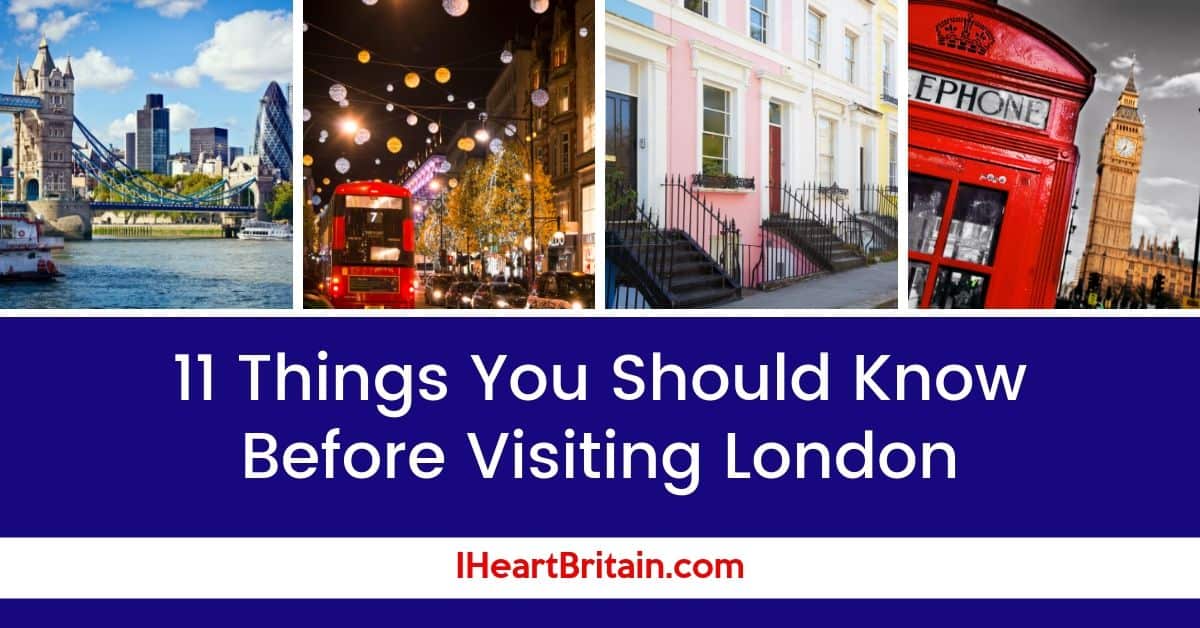 For a first-time visitor (or even a tenth-time visitor), London can be a bit intimidating. It's a bustling, multicultural city of more than 8 million people, hundreds of museums, and 32 boroughs. How in the world is somebody supposed to know where to start?

Assuming you're not on a package trip, it's safe to assume every person's London experience will be (and SHOULD be) slightly different. Some people want theatre, others want to see the classic attractions like the Tower of London and Big Ben, and still others want to visit the unusual places – the cemeteries and haunted alleys and antique shops.

With that in mind, we've compiled a list of tips that should help anyone get the most out of a visit to London.

11 Things You Should Know Before Visiting London 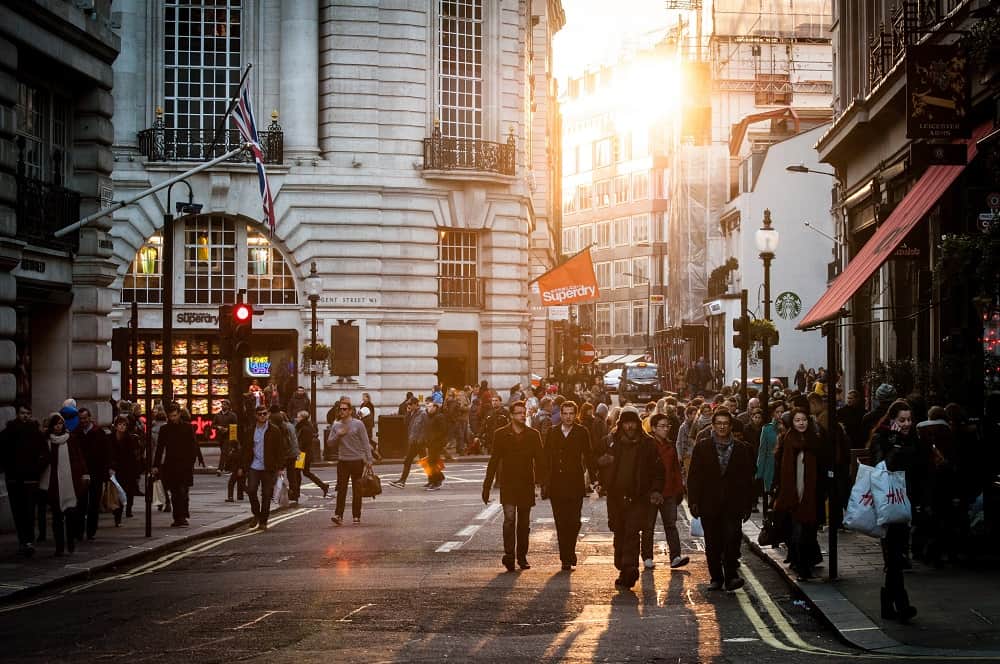 #1 – You Don't Have to Stay in the City, But it Does Offer a Different Experience

London has some of the best public transport links in the world, so if you're on a tight budget and hostel-style travel isn't for you, don't be afraid to stay a little further out (but do use Google Maps to make sure the hotel you get is near a station). Aim for fare zone 1 or zone 2 for the best combination of distance and price.

I will say, however, that you do get a very different experience staying a little further out, and it really just depends on where you want to spend your money. It's amazing being able to walk around at night near your hotel, walk to attractions during the day, and generally do things without  lot of subway time.

Most attractions close between 4 and 6pm, but there are still many shops and restaurants open later.  If your idea of a good time is to get up early, hit the museums and major tourist sites, grab dinner and get back to the hotel for an early bedtime, you may not feel at all like you're missing out by staying outside the central part of the city. On the other hand, if you're younger and you want to pack action into every waking hour, I'd recommend finding a way to stay near the action.

Whenever I know I'll be in London for a few nights, I aim to schedule that part over the weekend. Why? London is a city that gets a lot of business travelers, but most of that travel occurs during the business week. On weekends, hotels in the central city frequently offer deeply discounted rooms. On the flipside, places that attract a lot of weekenders (the Cotswolds, Edinburgh, seaside towns, etc.) tend to charge less during the week.

A little strategy can reduce your nightly costs in both types of locations. And if you need more London time, you could always come back the next weekend, assuming you'll be there that long and you're not too far off. 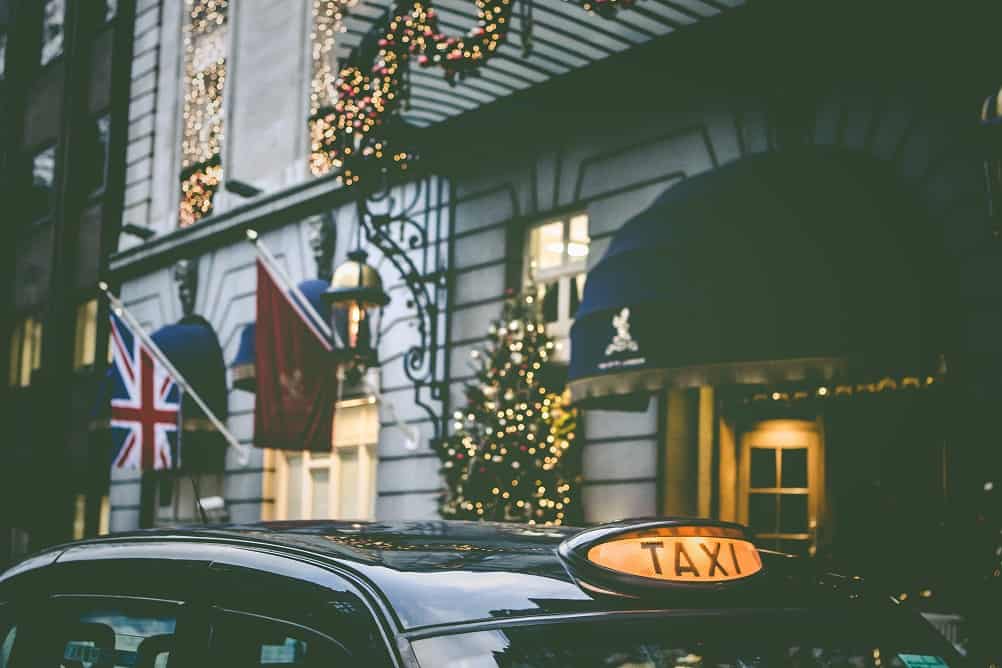 #3 – Hotwire is Your Friend in London

I use Hotwire almost exclusively in large Western cities, aside from those rare occasions when I have a specific hotel in mind. In case you're not familiar with it, Hotwire is a site where you get to pick your neighborhood and a list of amenities, but you don't know which hotel it is until you pay. It allows hotels to offer lower rates to fill extra rooms without looking cheap.

I know a lot of people are wary of blind booking sites, but as long as you remember a few things, they can offer a great experience and save you a ton of money.

On a recent trip to London, I used Hotwire and got a 4.5 star hotel in Kensington for $79+ tax. The best publicly-listed price for that night was $199+tax.

Side note: As much as I love Hotwire for cities, I don't typically use it in more rural or scenic destinations. In those places, I tend to have very specific preferences about accommodations, and I also prefer to patronize independent hotels and book directly.

If you intend to use the Tube to get around, definitely order your Oyster card online in advance. You can do that HERE – and the site also has tons of extra information about how it works and how much credit you should get. Your card will be ready to go, and the price is a little better this way.

That said, don't let any travel books or blogs shame you into getting an Oyster card and using the Tube and bus system. It can be crowded and noisy and a little confusing to some people, and if you don't want to deal with that, don't feel like you have to.

If you stay near the major attractions you want to see, you can walk to quite a lot and get a taxi for those things that aren't within walking distance. The taxis aren't terribly cheap, but they're also not outrageously expensive. This site will give you a rough idea of what taxi fares come to, and you can use Google Maps to estimate driving time if you're really concerned. The nice thing about taxis in London is that they actually know where they're going.

London also has Uber, which is nice because you can use their app and get price estimates in advance of your journey. To get a free first ride, use promo code p40qd or click here to sign up.

#5 – Remember, Most Museums in London Are Free

While London can be an expensive place to travel, the amazing thing about London (and most of the UK) is that most museums are free. Some may have special exhibits that require an extra fee, but basic access is free at many of the best museums in the city. If you're on a tight budget, adding some museums to your itinerary can be a great way to great time without spending a ton.

I may be missing a few, but this list of London museums with free admission should get you started.

#6 – Theatre Tickets Don't Have to be Outrageously Expensive

If you're on a tight schedule and you have very specific preferences about the show you want to see and where you want to sit, then go ahead and pay full price and lock those tickets down. On the other hand, if you just love theatre and you'd like to save a bit of money, you'll be pleased to know that just like in New York City, you can get discounted last-minute tickets via a TKTS booth in Leicester Square.

TKTS offers tickets for shows happening anywhere from 0-2 days away, and you can check what's available ahead of time online by going HERE.

It's actually kind of overwhelming when I think of just how many amazing places you can get to within a 1-2 hour train ride out of London. In a little over an hour and a half, you can be in Moreton-in-Marsh (a lovely Cotswolds market town). In around 2 hours, you can be in the wonderfully historic city of York. Canterbury and the coastal city of Brighton are both around an hour out.

Now, I'd much rather spend several days in these places, but if your time is limited and you're only staying in London, don't think you actually have to stay in London. There are tons of things you can do without spending too much time on the train.

When I travel to NYC or Las Vegas, I arm myself with a thick wad of small bills. It seems like everywhere you go, somebody needs a tip. In some restaurants, it's considered rude to tip anything less than 20%.

In the UK, it's not like that. A 10-15% tip is fairly normal in restaurants, but do double-check to ensure that a service fee wasn't already added. In taxis, 10-15% is common, but nobody will blink twice if you just round up to the nearest pound for most journeys. If it's a long trip and you get some help with luggage, a slightly bigger tip would be considered appropriate.

In bars and pubs, tips are not the norm. Some people even find it mildly offensive. Then again, there are also  places where people (mostly regulars) will offer the barman or woman a pound or so, saying, “and one for yourself”. Bartenders don't drink on shift, of course, but it's sort of a symbolic gesture. Unless you get friendly with the bartender or frequent the same pub over the course of your trip, it's probably safer just to avoid tipping.

It's not unusual to tip a hotel porter or leave a bit for housekeeping upon departure, but unlike in the US, you're unlikely to get any weird looks for NOT tipping. 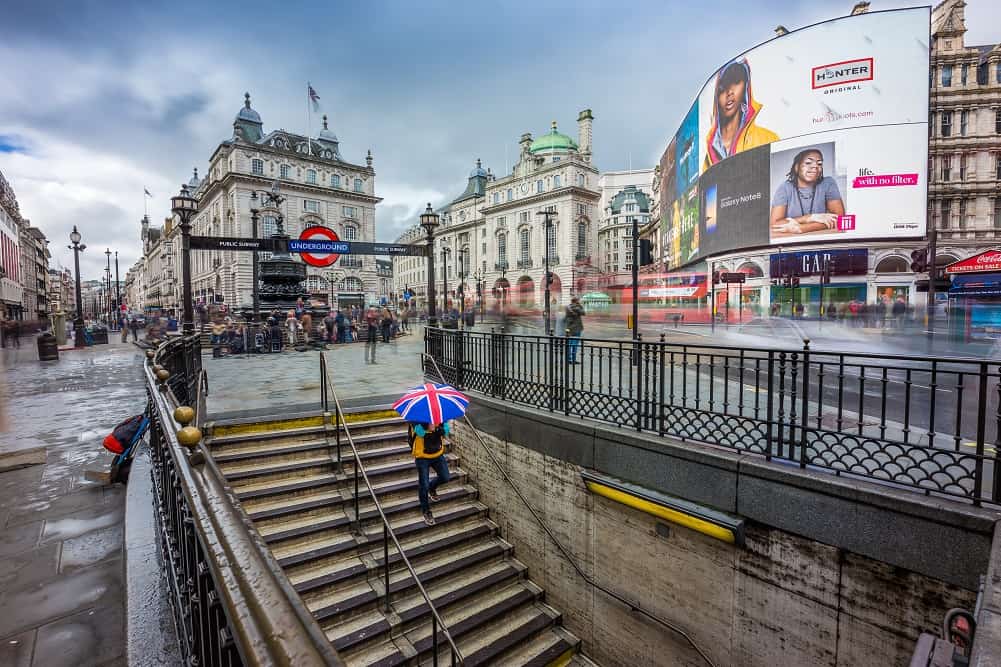 #9 – Be Prepared for Weather

Weather in the UK can be unpredictable. While you're quite unlikely to see temperatures higher than 95F or lower than 30F, anything in between is fair game. Summer highs average in the 70s, and winter lows are generally in the low 40s. Rain is almost guaranteed at some point during your trip, so it's wise to pack a small collapsible umbrella.

In terms of clothing, be sure to bring some kind of waterproof or water-resistant coat, and if you'll be heading out to the countryside, don't forget the waterproof shoes or boots. In terms of clothing, you can never go wrong with layers. While I love the concept of traveling with just a carry-on, I always end up bringing a larger suitcase in preparation for British weather (and to avoid spending too much time doing laundry).

The other important part of preparing for British weather is being prepared to TALK about British weather. British weather conversations are weirdly fascinating, and you'll find you often learn just as much about a person's mood as you do about the weather. If this doesn't make sense to you, I recommend watching Very British Problems. 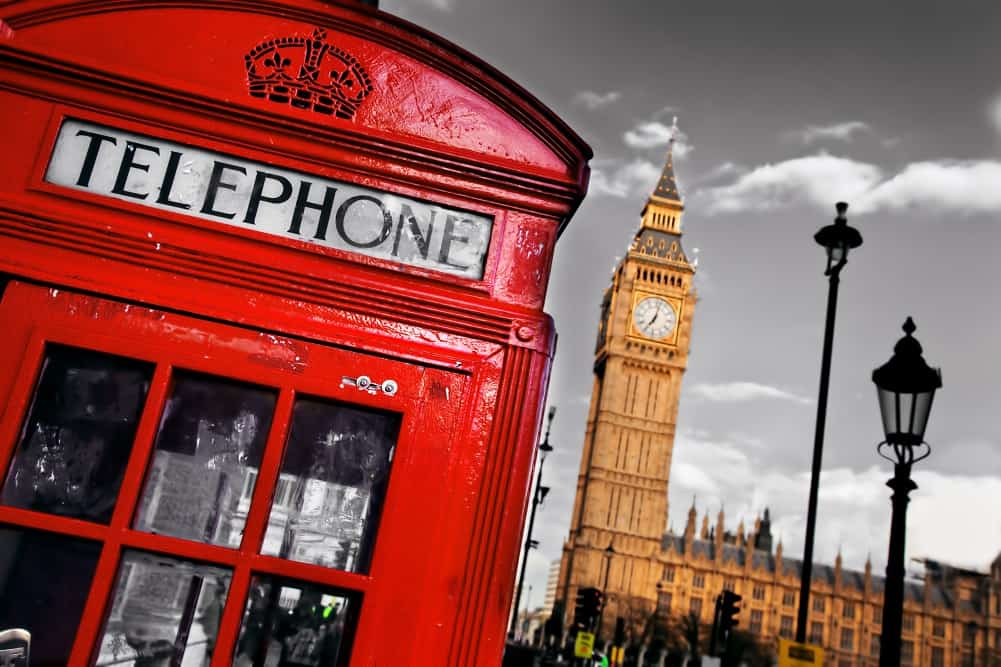 The same goes for any of the other major tourist attraction. Travel the way you want and see the things YOU want to see. Don't let a guidebook or top 10 list convince you to spend your precious vacation time seeing things you don't particularly care about. Personally, I love quirky attractions and ghost tours and bookshops, but I'm not terribly interested in watching the changing of the guard. I've never bothered to go see it, and I'm happier for it because I use my time to do things I actually do enjoy.

Prefer more offbeat London attractions? Here are a few to get you started: 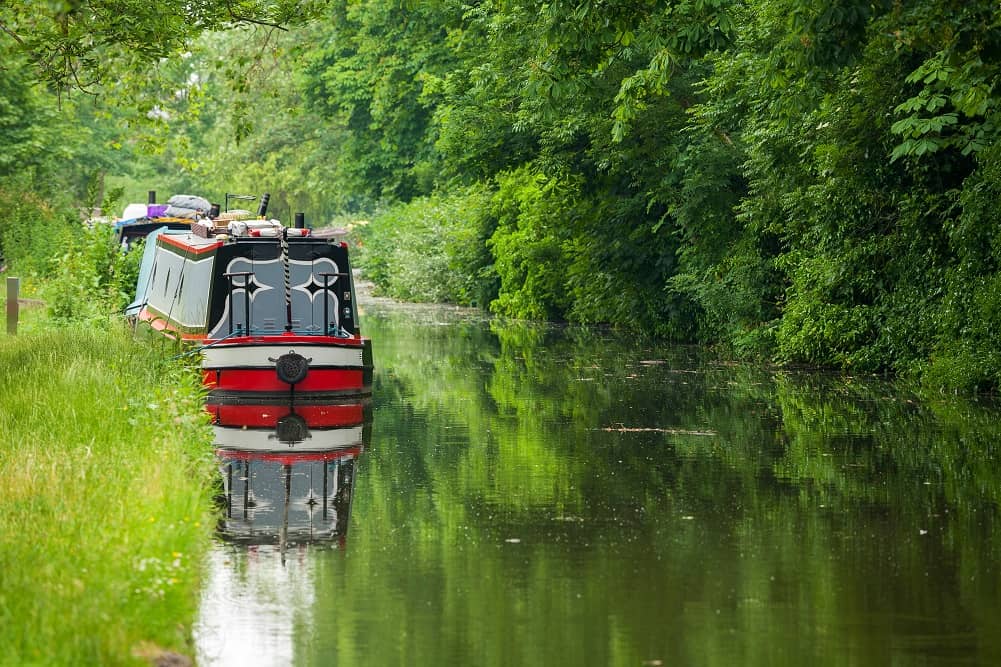 #11 – It's Okay to Skip London Completely

London is a great city, but it's not everyone's cup of tea. Personally, I like London – but I LOVE the smaller cities and countryside. I often spend the first night of a trip in London, but I move on quickly to get to the things I really enjoy.

Not wanting to spend a lot of time in London doesn't make you weird or bad or somehow less of an Anglophile. If you'd rather be floating down a canal near Stratford-upon-Avon or walking the city walls in York or looking for dinosaur footprints along the Jurassic Coast, then by all means, do that instead.

Have we skipped over any great tips you've picked up during your trips to London? Don't hesitate to share in the comments! 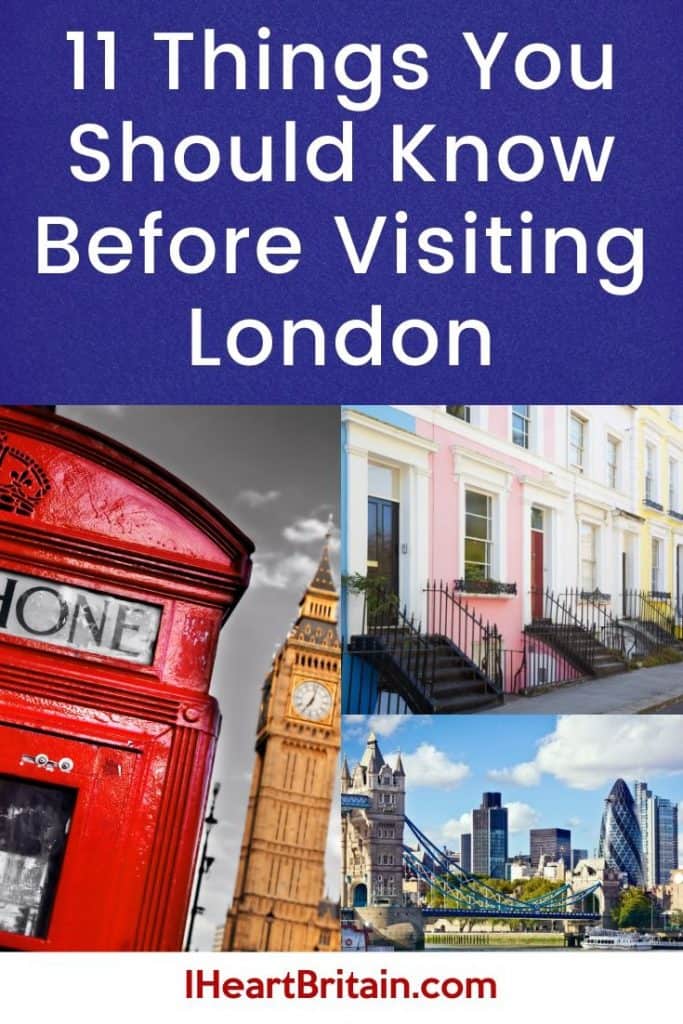 2 thoughts on “11 Things You Should Know Before Visiting London”